Ridley Scott returns to advertising to direct his first commercial in over 15 years for the world’s best-selling cognac, Hennessy. Scott partners with Hennessy for a series of groundbreaking commercials for the Hennessy X.O cognac, which will premier globally in 2019.

Complementing the idea that ‘Each drop of Hennessy X.O is an Odyssey’, the direction of Alien, Blade Runner and Gladiator creates an epic visual journey that explores seven taste-scapes in a surreal, sensory narrative.

The campaign film is produced through Scott’s production company RSA Films, which this year celebrates its 50th anniversary.

Says Ridley Scott, “I’m very pleased to partner with Hennessy for my first commercial in 15 years. From the very beginning, the project has been about the creative process. I saw the initial script and it immediately triggered someting in me. I started scribbling and thos scribbles turned into a detailed storyboard and a productive visit in the Cognac region. I love partnering with Hennessy as the creative process was an absolute priority throughout. The result is not simply advertising, it’s entertainment. We are now in post-production with an ingenious CGI team and I am looking forward to the official launch in 2019.”

“Luxury appeal is about emotion, it’s about building a dream. Who better than a world-creator like Ridley Scott for Hennessy X.O, the iconic flagship of our range, the Original X.O? His mastery and imagination are unsurpassed, he will capture our audience’s hearts and minds” says Thomas Moradpour, Global CMO for Hennessy.

All seven notes evocatively take shape under the iconic filmmaker’s direction, with his subversive sens of narrative and visual, unique light and his knack for radical, technical innovation.

A series of seven 3D ads, created in collaboration with Berlin-based visual trend lab Foam Studio, will act as a precursor to the full film and will debut globally in Fall 2018. The visionary studio Foam creates seven emblematic tunnels, ultimately leading to Ridley Scott’s complete Odyssey, revealed in 2019. The sensorial visual work embodies, each one of the seven distinct flavour notes of Hennesy X.O in a tacticle, hyper graphic and poetic visual, that hovers between reality and the mythical.

Both the film, and the 3D ads were created by advertising Agency DDB° Paris.

‘Worlds of Greatness’ print and video campaign produced by Hennessy.

ABOUT RIDLEY SCOTT
Ridley Scott, one of the world’s foremost directors and producers, is most known for his work on films such as Thelma & Louise, Alien, Black Hawk Down and Blade Runner. His film epic Gladiator won the Oscar, Golden Globe®, and BAFTA Awards for Best Picture, as well as the Oscar for Best Actor in a Leading Role for Russell Crowe. Throughout his illustrious career, Scott also been lauded by the Emmy Awards, Cannes Film Festival and the PGA Awards. In 1968, Scott formed RSA as a commercial production house for some of the world’s most recognized corporate brands. In 1995, Scoot formed Scott Free Productions to serve as a production company for his film and television projects such as Hannibal, Man on Fire, American Gangster and Concussion, the critically-acclaimed CBS drama, The Good Wife, and the hit telefims Killing Lincoln, Killing Kennedy, and Killing Jesus. The moste recent feature-films produced by Scott Free include Blade Runner 2049, starring Ryan Gosling and Harrison Ford, and Murder on the Orient Express, starring Kenneth Branagh, Johnny Depp and Michelle Pfeiffer. As a director, Scott’s most recent projects include Alien: Covenant, the sequel to Prometheus, starring Michael Fassbender and Katherine Waterston, and All the Money in the World, about the kidnapping of John Paul Getty III, starring Christopher Plummer, Michelle Williams and Mark Wahlberg, which debuted in December 2017.
Scott’s fascination with advertising goes back to his education at London’s Royal College of Art. Throughout his career, he continuously revolutionized the advertising landscape.

The sevent 'Worlds of Greatness' of Hennessy X.O

Sweet Notes: The palate is warmly embraced by flavors of candied fruit - the faint sweetness of oranges fused with the subtle tartness of apricots.

Rising Heat: The intriguing sensation of an intense, rising heat slowly reveals the complex taste of eaux-de-vie that have patiently aged in oak barrels.

Flowing Flame: A wave of warmth grows, crests and the breaks; the mouth is awash with the sensation of an immense roundness. A robust presence, full and voluptuous, is felt.

Chocolate Lull: There is the gradual discovery of something familiar. It is the well-rounded flavour of a rich, dark chocolate. Slightly sweet and silky smooth, it gently caresses the palate.

Wood Crunches: A striking sensation is suddenly felt - the vigorous ebb and flow of oak notes interlaced with vanilla. With their bold and complex taste, they make their powerful presence felt and then vanish.

Infinite Echo: The evanescent oak notes leave a long, omnipresent finish in their wake, echoing the subtleties of each flavour and sensation that has precede it, as well as the complexity of X.O's blending and long aging process. 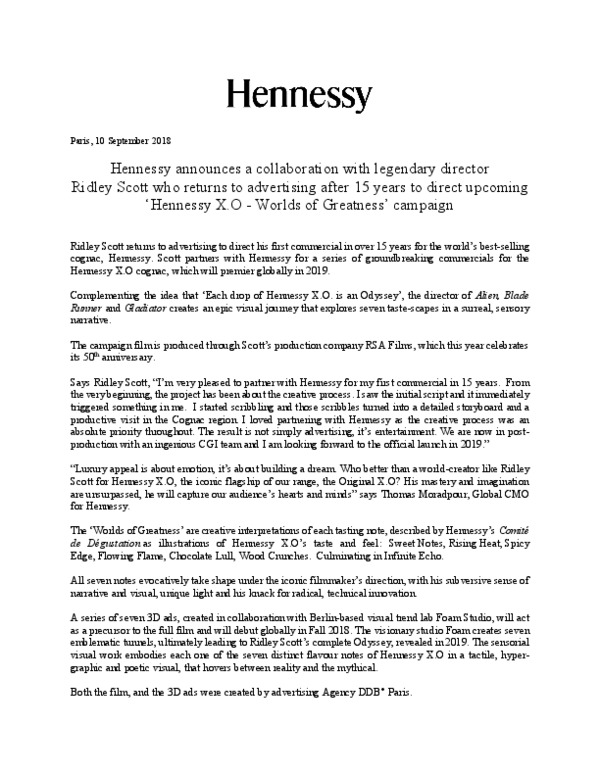 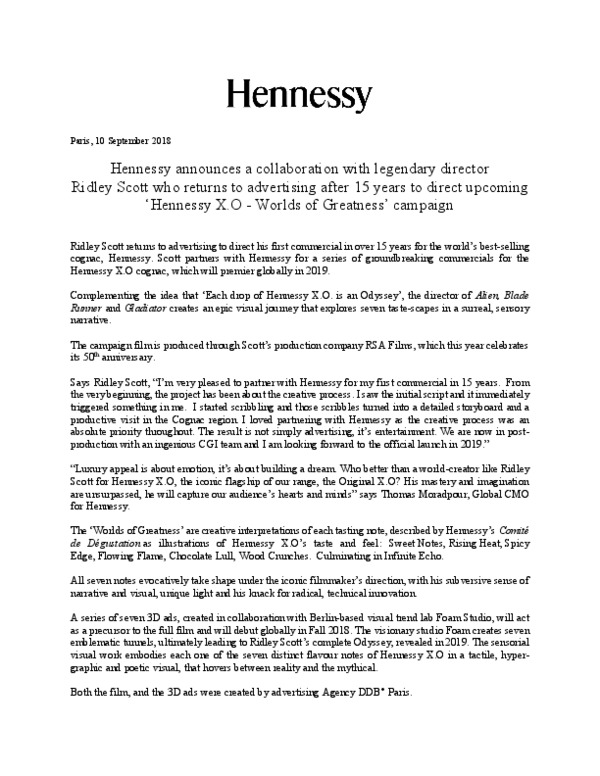 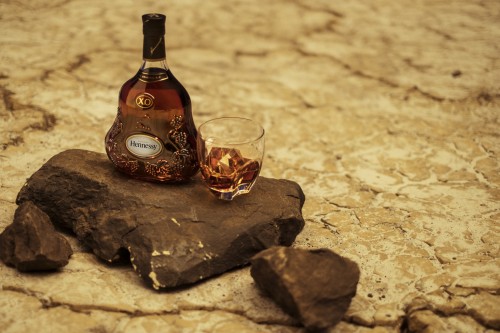 HENNESSY X.O - WORLDS OF GREATNESS - Behind the scenes Chocolate Lull 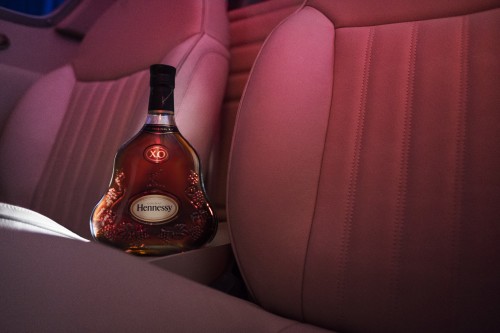 HENNESSY X.O - WORLDS OF GREATNESS - Behind the scenes Flowing Flame 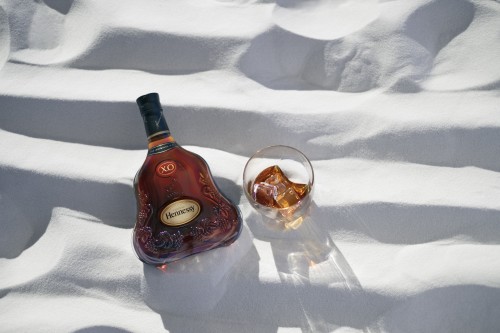 HENNESSY X.O - WORLDS OF GREATNESS - Behind the scenes Rising Heat 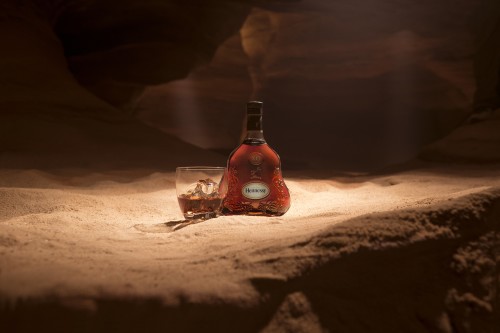 HENNESSY X.O - WORLDS OF GREATNESS - Behind the scenes Sweet Notes 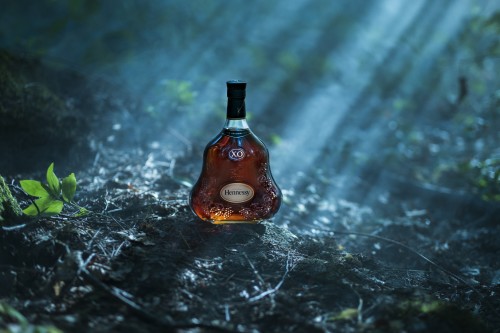 HENNESSY X.O - WORLDS OF GREATNESS - Behind the scenes Wood Crunches 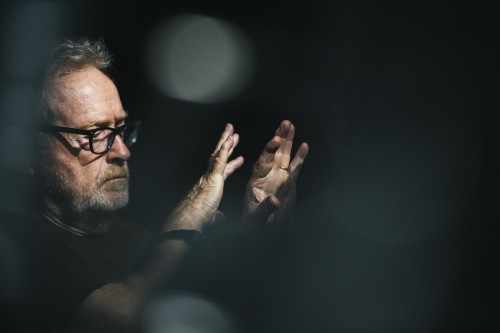 HENNESSY X.O - WORLDS OF GREATNESS -Behind the Scenes Ridley Scott 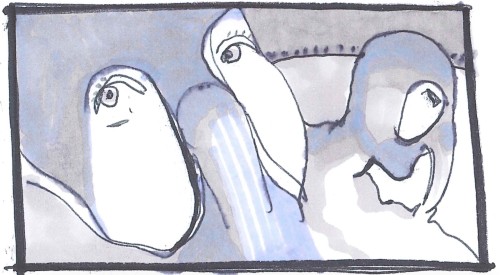 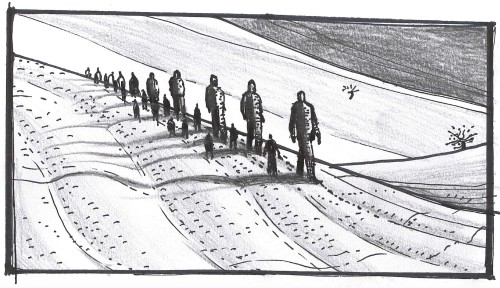 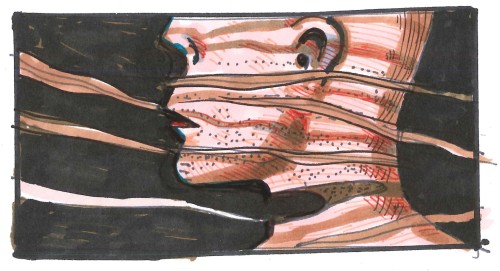 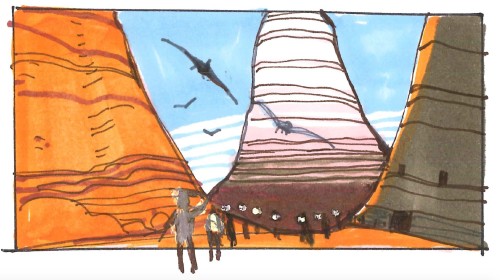 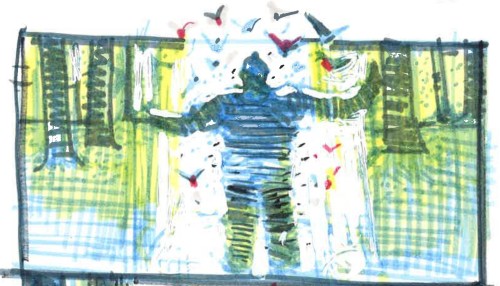