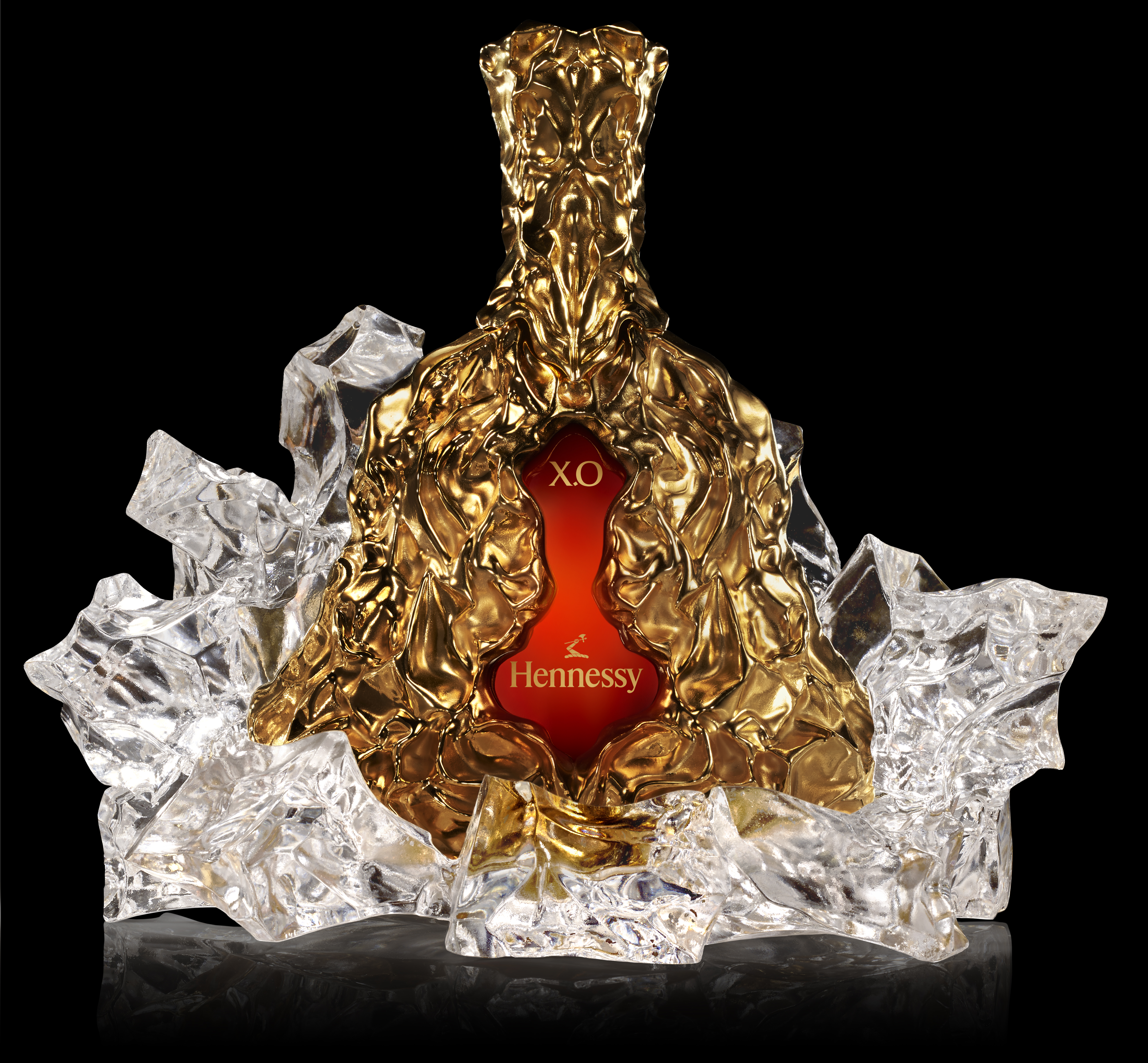 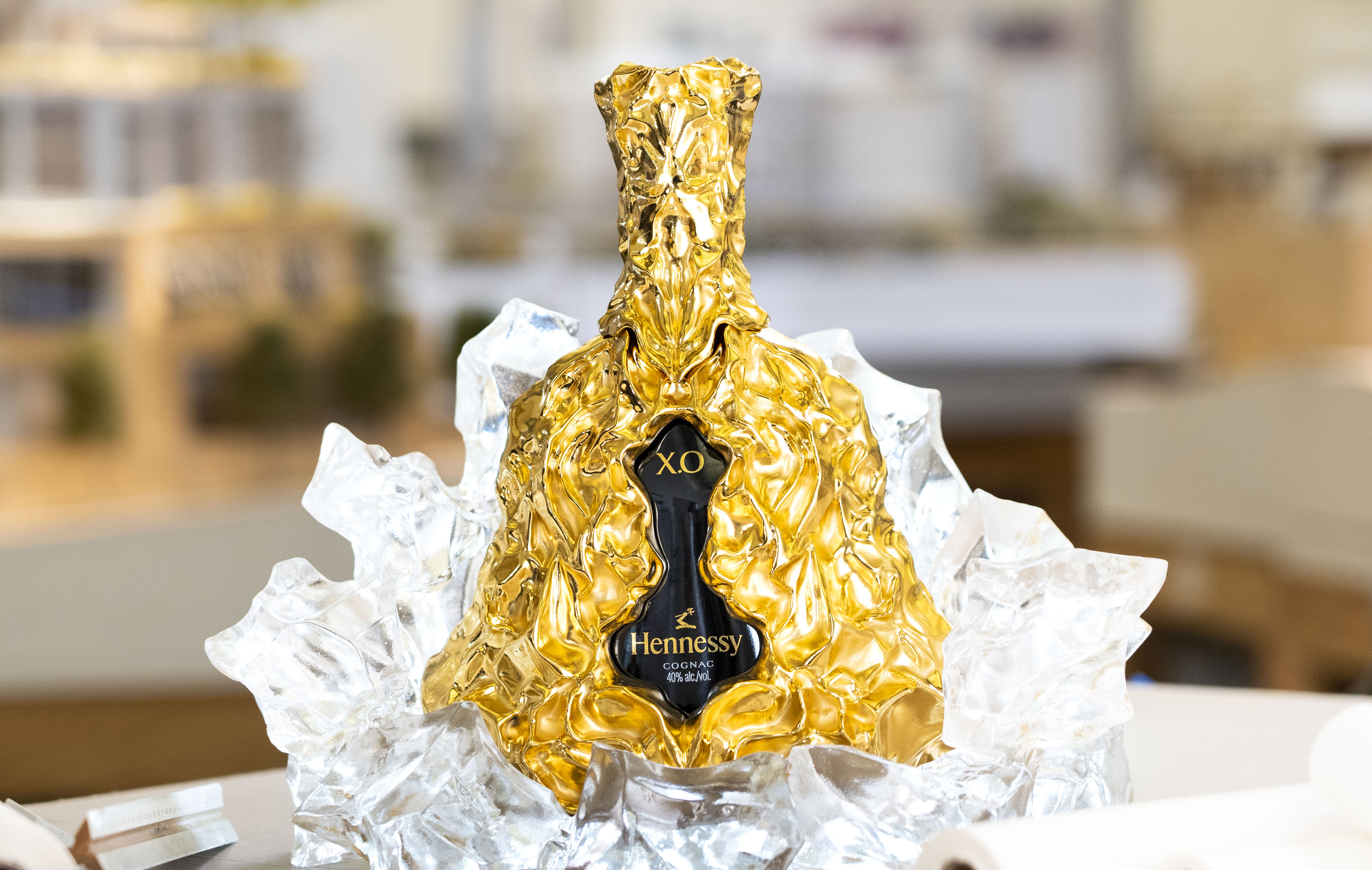 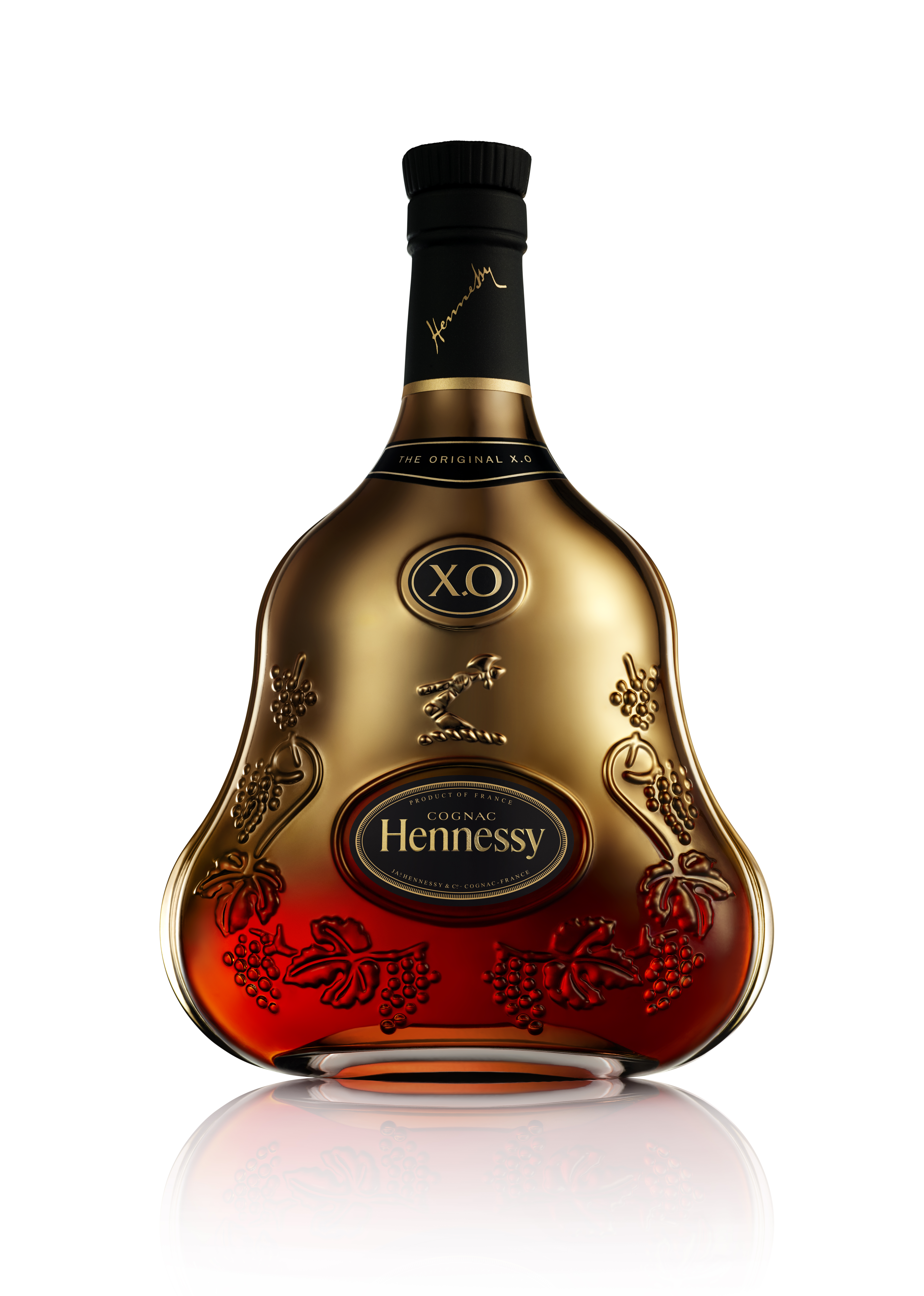 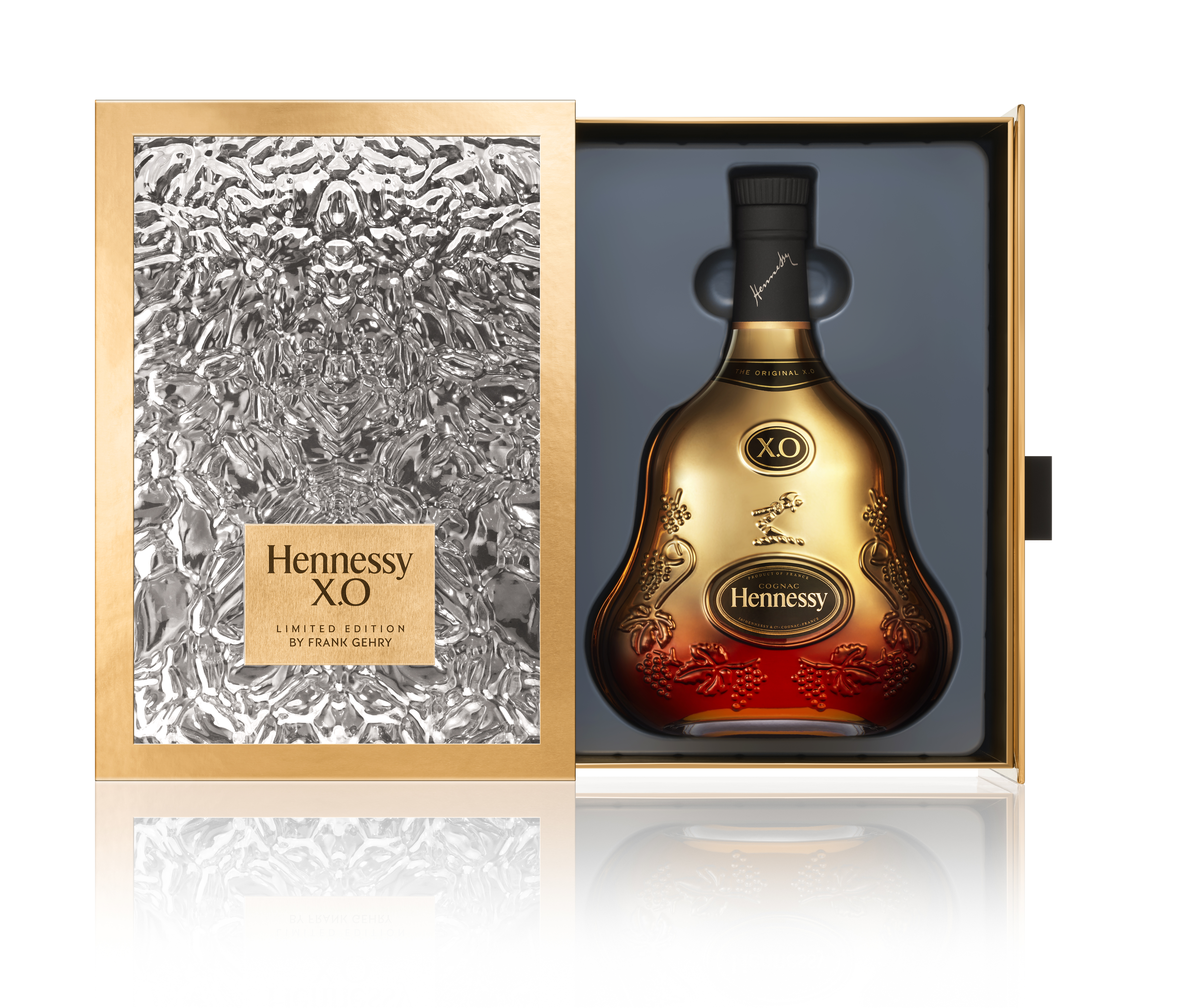 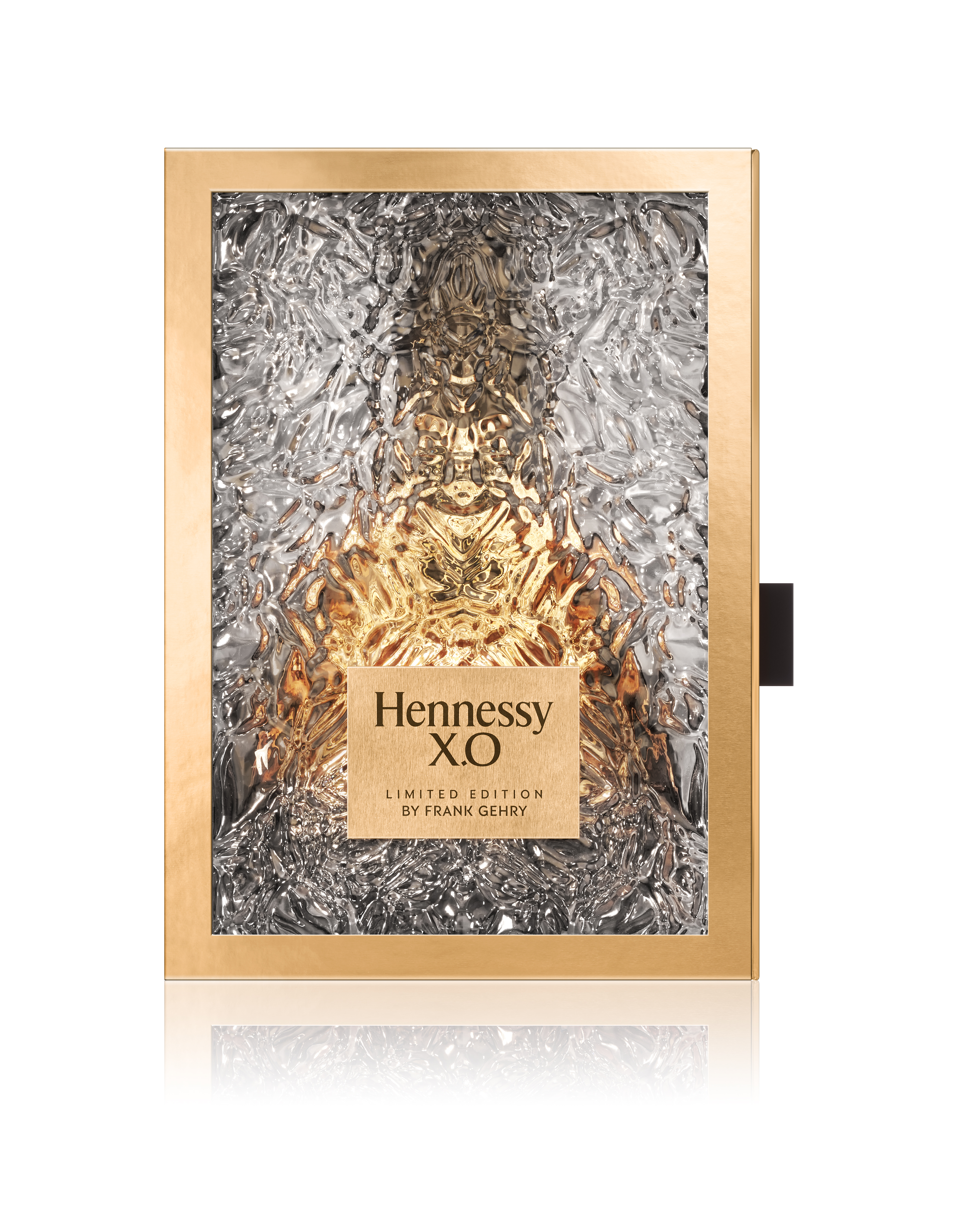 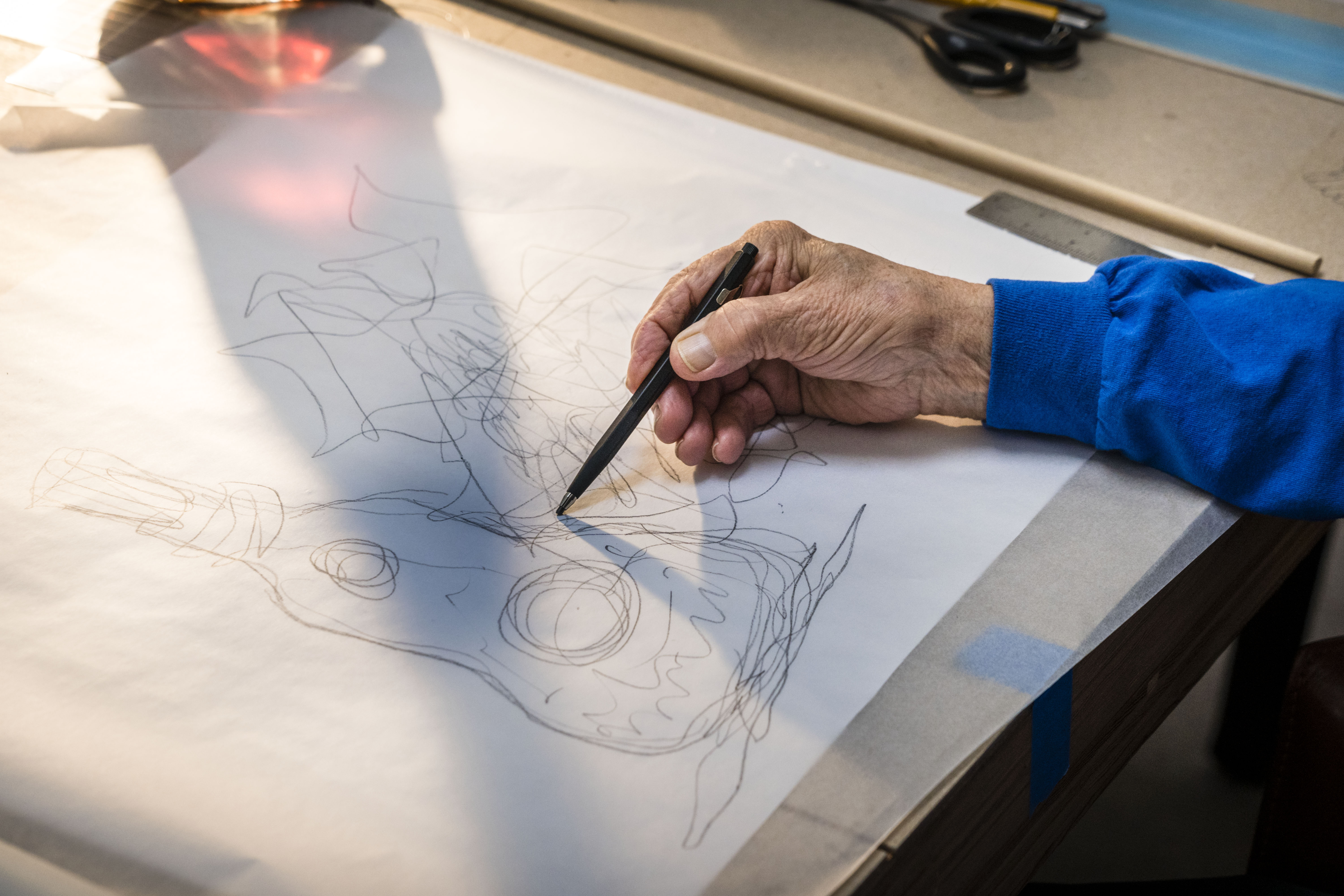 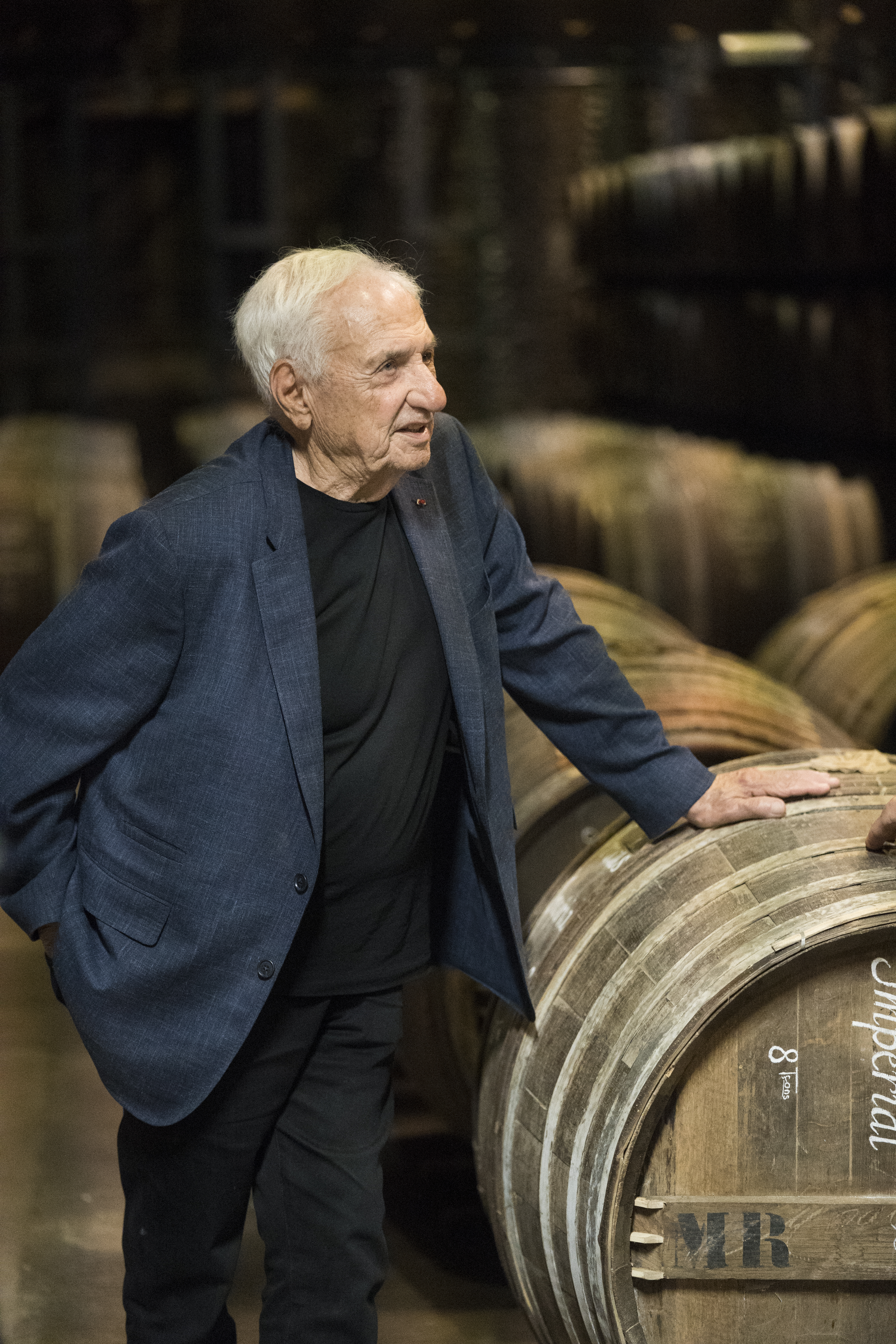 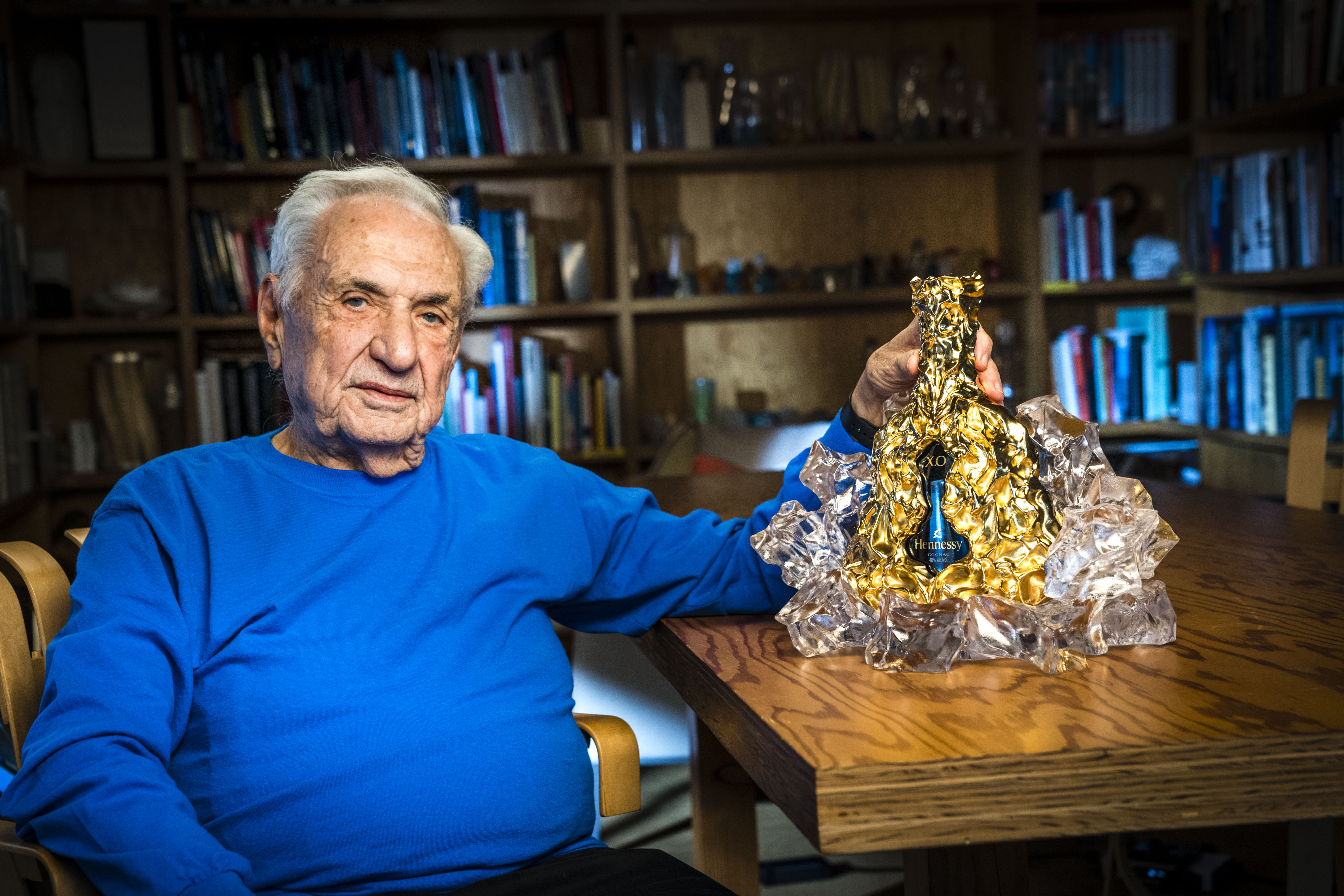 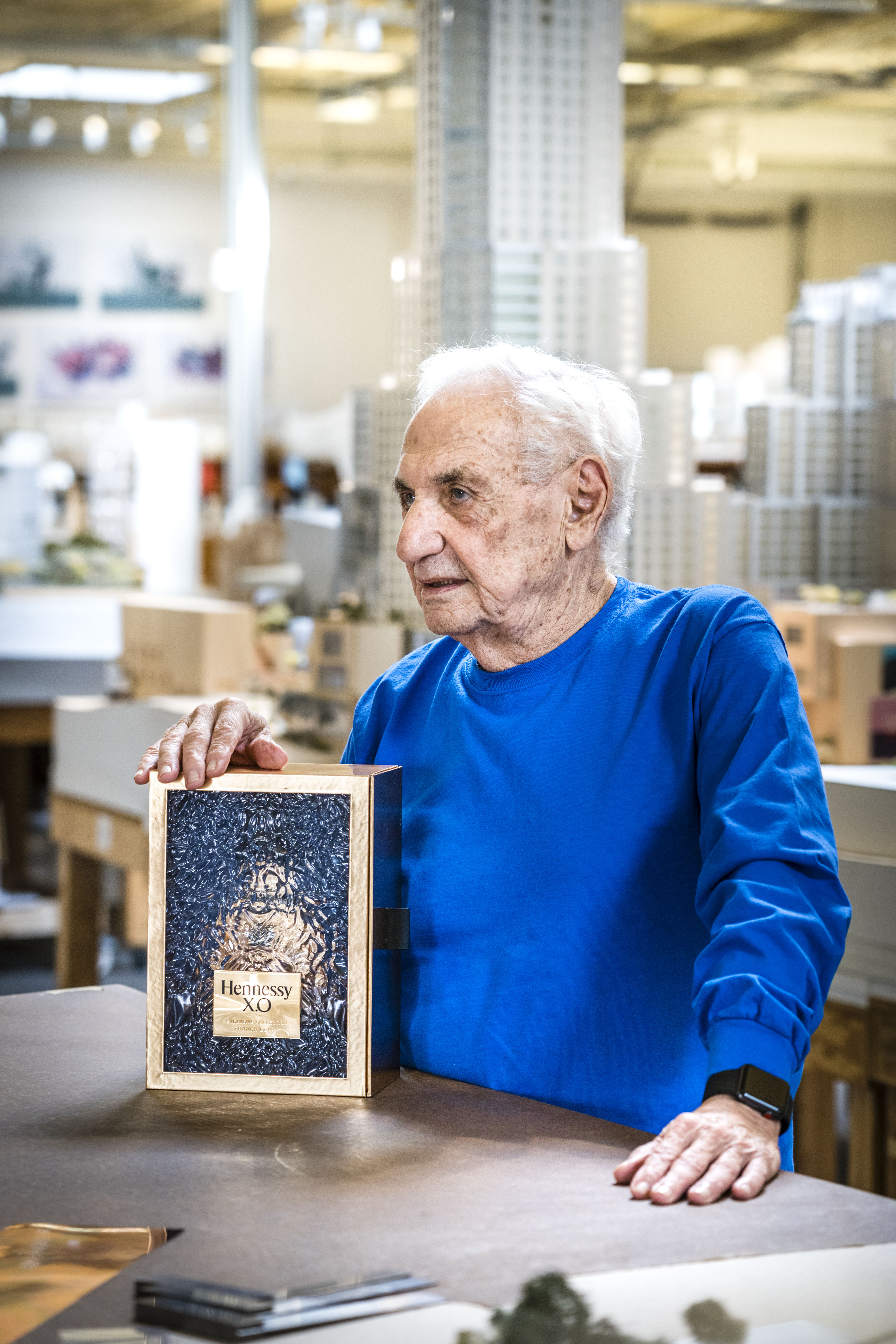 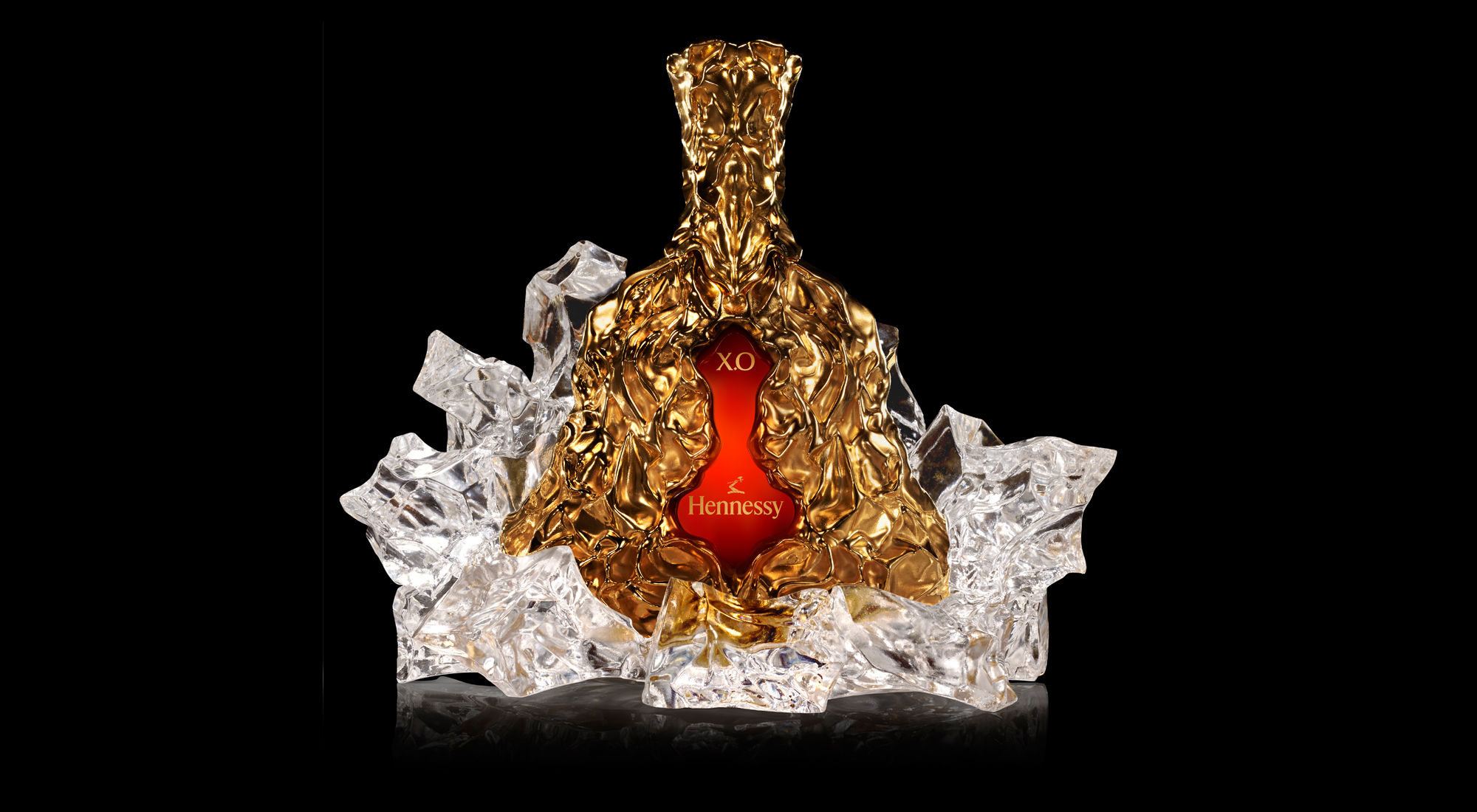 THE WORLD-RENOWNED ARCHITECT PAYS HOMAGE TO THE ODYSSEY OF THE "EXTRA OLD" COGNAC WITH A 150TH ANNIVERSARY MASTERPIECE
Hennessy is pleased to unveil a limited-edition decanter designed by world-renowned architect Frank Gehry in celebration of the 150th anniversary of Hennessy X.O. Using his signature sculptural style to reinterpret the Hennessy X.O's timeless bottle, the prolific creator marries gold and glass to extol the rich legacy of the Hennessy Maison. The end result ushers in a fitting new era for the Extra Old cognac with a striking design that encapsulates Gehry's trademark unconventional aesthetic with Hennessy's daring sensibilities.

To discover Hennessy X.O is to discover an unexpected sensorial experience. This ethos is exemplified with an exclusive, limited run of 150 extraordinary numbered decanters, imprinted with Frank Gehry's signature. A wider release of limited-edition Hennessy X.O bottles also created by Frank Gehry, will launch in markets worldwide to further celebrate this exceptional collaboration.

150 years after its creation, at the 2020 harvest season, Hennessy X.O commissioned a remarkable World Odyssey, unveiling Frank Gehry's creation to the world on September 25th on the same day as the epic, ephemeral daytime fireworks event by artist Cai Guo-Qiang over Cognac's Charente River. The centerpiece of Hennessy X.O's 150th anniversary World Odyssey program - the event was shared globally via livestream - a first for both Cai Guo-Qiang and the Maison. During this time of global transformation and togetherness, Hennessy and Frank Gehry share a vision for a hopeful future as they collaborate to amplify Hennessy Maison's universal values of joy, optimism, and resilience.

Speaking on the collaboration Frank Gehry said, "It was an honor to be asked to celebrate this milestone for Hennessy X.O. While I was excited, it was also daunting because a bottle of cognac is already a work of art, one you can smell, taste, and feel - it doesn't need embellishment as it's already there. We are showing how we can be creative within that language. There's such a powerful history and serious emotional commitment from the people that make this product. It has a resonance that's interesting to tie into and become a part of."

A SHIMMERING BEACON OF MASTER CRAFTSMANSHIP

Frank Gehry's boundless designs (including the Guggenheim Bilbao, Walt Disney Concert Hall in Los Angeles, and The Fondation Louis Vuitton in Paris to name a few) never stop pushing the theme of movement - the ground bends, wall lean, lines defy gravity, and the impossible is not only imagined but executed with pure emotion and visual poetry.
Frank Gehry has created the Hennessy X.O masterpiece with the same philosophy, passion, and curiosity as he does when designing his architectural masterpieces. Just as he always respects the surrounding environment of his work, Frank Gehry deeply considered the rich customs, composition, and art of distillation of the storied Hennessy X.O cognac, as well as taking into account the savoir-faire heritage of the Hennessy Maison.

Drawing inspiration from the rich Hennessy X.O blend, and the vital soil, twisting wines, and the glistening Charente River that runs through the Hennessy Maison, Frank Gehry has created a true sensorial masterpiece. The iconic Hennessy X.O bottle is enveloped in a crinkled sleeve of 24 carat gold-dipped bronze, evoking the radiant movement of water as it reflects the light. The sculptural decanter is encased by a fractured glass glorifier, which further amplifies the inspiration of water and light.
"I wanted to bring it to life, and so I took inspiration from its birthplace and used this crumpling effect of the material that gives it a feeling of movement" Gehry adds. "The materials I've chosen catch the light and make this a really beautiful object on its own, but then you realize it is a bottle of Hennessy X.O."
The thought-provoking and challenging design was executed with the work of artisans who created the second skin of Hennessy X.O. Just like the Master Blenders, who pass on their expertise, the artisans perpetuate an art form and the gift of secret craftsmanship. Each stage that went into bringing Gehry's idea to life, required care, attention, high standards and patience.

A UNIQUE AND UNPREDICTABLE TOUCH

To further the experience of the decanter, Frank Gehry has created a luminous and beautifully understated fusil made of brass and gold. The device keenly reflects the Hennessy cellar master's ritual to extract the extra old cognac. Further keeping with the element of surprise and contrast, the decanter, glorifier and fusil are packaged in a protective case that is in itself a design object, imprinted with Frank Gehry's signature and made of compressed cardboard, an homage to a series of corrugated furniture Frank Gehry designed in the 1970s.

Hennessy Master Blencer Renaud Fillioux de Gironde and the Hennessy Comité de Dégustation have parsed Hennessy X.O's taste odyssey into seven distinct chapters that flow seamlessly into one another. While these perceptions tend to vary depending on each person's individual palate, understanding and life experiences, the chapters typically unfold as follows:

SWEET NOTES - Flavors of candied fruit embrace the palate as the faint sweetness of oranges fuses with the subtle tartness of apricots.
FLOWING FLAME - A wave of warmth breaks into immense roundness. Robust and voluptuous?
RISING HEAT - Warm fruit flavors lead into a sensation of rising heat, slowly revealing the complex taste of patiently aged eaux-de-vie.
CHOCOLATE LULL - The familiar, well-rounded flavor of a rich, dark chocolate caresses the palate with silky, slightly sweet smoothness.
SPICY EDGE - A strong spicy note tantalizes the palace with distinct peppery over notes.
WOOD CRUNCHES - The striking sensation of oak notes interlaced with vanilla makes its presence felt and the subsides.
INFINITE ECHO - The long, omnipresent finish with evanescent oak notes - a sensation Renaud Fillioux de Gironde describes as creating "an infinite echo" of the subtleties of each flavor and the complexity of Hennessy X.O's blending and long aging process.

Frank Gehry has built an illustrious architectural career that has spanned over six decades. His public and private work throughout the world including the Bilbao Guggenheim, the Walt Disney Concert Hall in Los Angeles, the Art Gallery of Ontario, Hong Kong's Opus Tower, and the Fondation Louis Vuitton in Paris - is designed with a shared clear-cut philosophy that people must exist comfortably within his spaces and an insistence that his buildings address the context and culture of their sites.
Raised primarily in Toronto, Gehry received his Bachelor of Architecture degree at the University of Southern California in 1954. Upon graduating, he enlisted in the U.S. Army, and with the assistance of the GI Bill, he studied City Planning at the Harvard University Graduate School of Design until 1957. Throughout his illustrious career, Gehry has also received honorary doctoral degrees from such esteemed institutions as the Rhode Island School of Design, Princeton University, and, most recently the University of Oxford. He has also held teaching positions at many universities, including Harvard, UCLA, and Yale, where he is still teaching. His contribution to architecture has earned Gehry some of its most significant recognitions in the field, including the prestigious Pritzker Architecture Prize, the Friedrich Kiesler Prize and the Presidential Medal of Freedom from Barack Obama.
Gehry's notable current projects include the Guggenheim Abu Dhabi, Toronto's King Street Development, 8150 Sunset in Los Angeles, the World Jewish Museum in Tel Aviv, and the Los Angeles River revitalization project. His projects under construction include the Philadelphia Museum of Art, a new center for Youth Orchestra Los Angeles (YOLA), and the Dwight D. Eisenhower Memorial in Washington, D.C. The Hennessy X.O 150th anniversary Masterpiece is Gehry's first project with Hennessy.

ABOUT THE 150TH ANNIVERSARY OF HENNESSY X.O

in 1870, Maurice Hennessy, a 4th-generation member of the Hennessy family, asked the Cellar Master Emile Fillioux to create a special cognac for his family and friends, using long-aged eaux-de-vie to perfect the blend. They called it "X.O" for "Extra Old". Hennessy X.O became the first House blend to attain international renown, to the point that the X.O classification became a gauge of uncompromising quality.
In 1947, Gérald de Geoffre - Maurice Hennessy's great-grandson - created its iconic carafe, a shape inspired by an upturned cluster of grapes. Today, Hennessy X.O remains as true as it was when Maurice Hennessy first shared it with his inner circle. A timeless symbol with a powerful and balanced structure, it carries the promise of an extremely long finish: each drop is an invitation to embark on an odyssey of the senses through seven tasting notes.
In 2020, Henbnessy X.O celebrates its 150th birthday  by honoring its history while looking to the future. To mark the occasion during these unprecedented times of renewal, Hennessy Maison will continue the World Odyssey in a remarkable way, by supporting the global community through charity initiatives. The odyssey continues with a shared vision of community and connection as we move forward together with perseverance and promise. 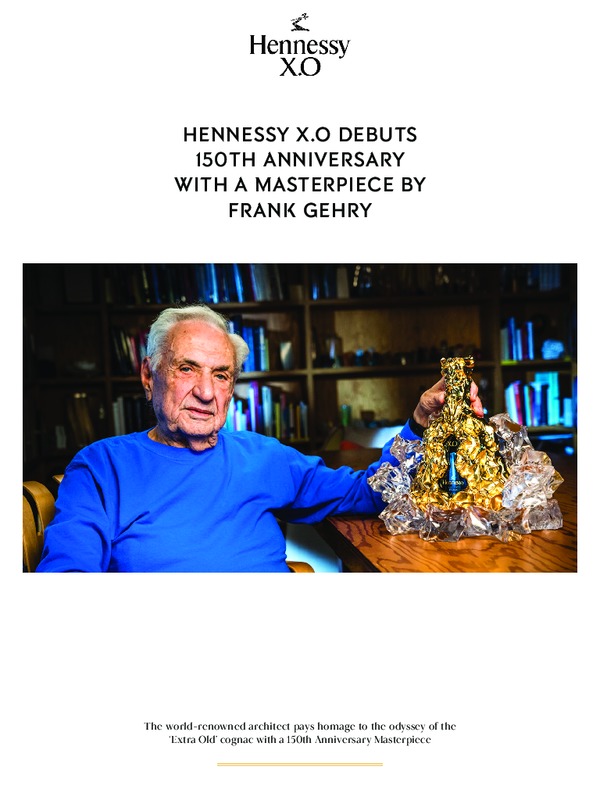 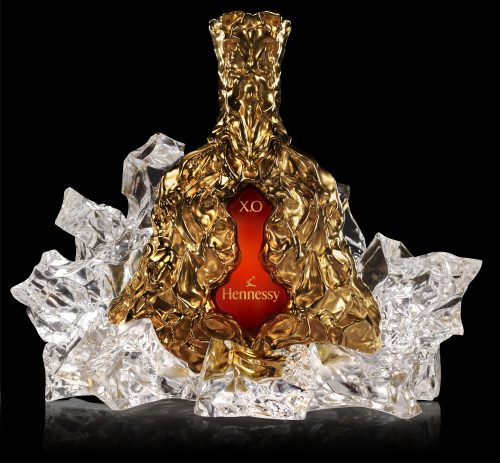 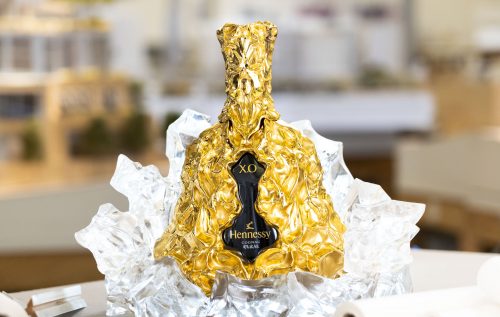 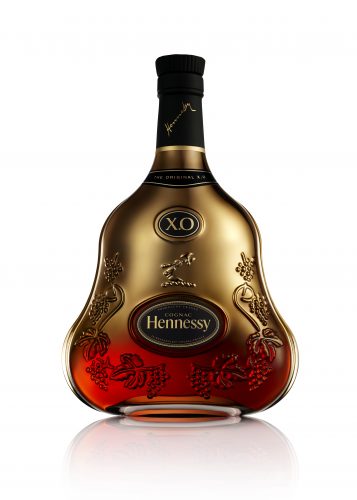 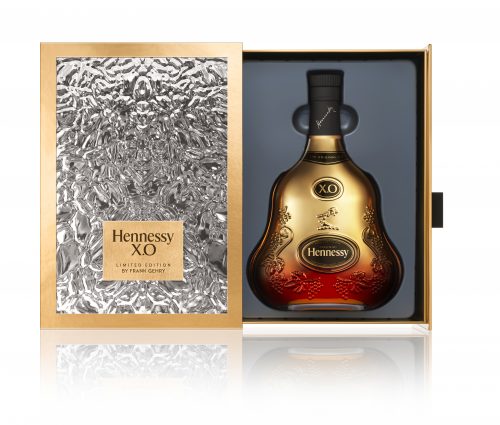 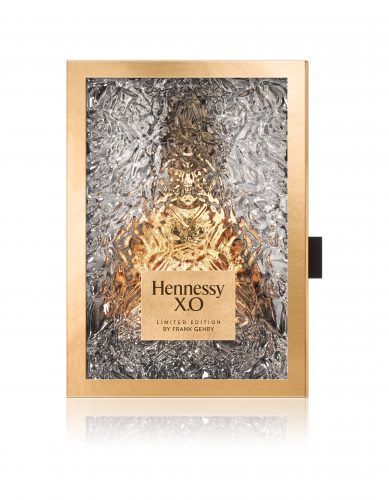 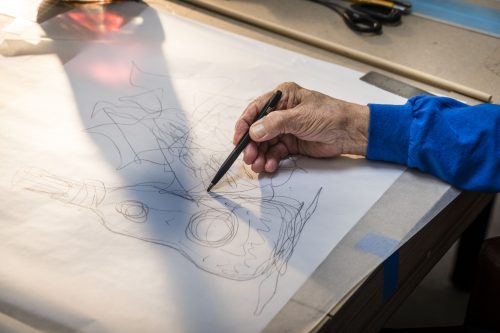 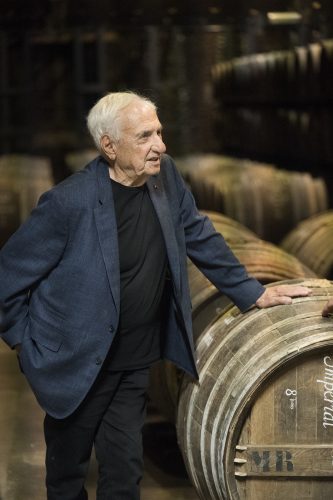 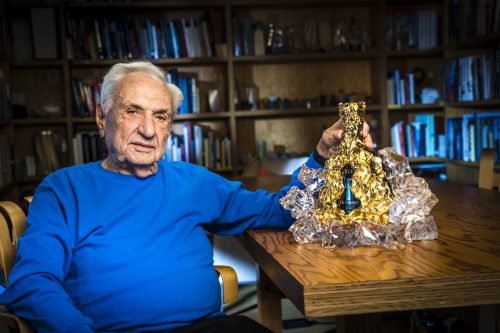 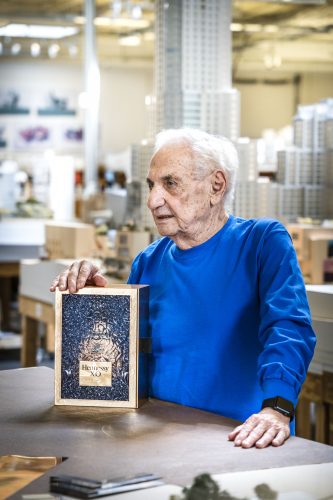